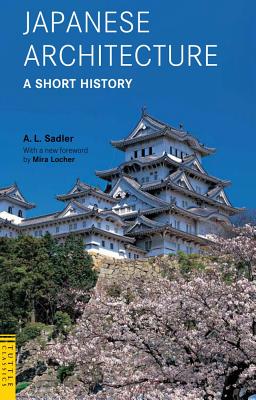 By A. L. Sadler, Mira Locher (Foreword by)

This timeless guide to Japanese architecture is of enormous historical importance to the understanding of Japanese design and culture. Pioneering Japanologist A. L. Sadler's invaluable study of Japanese architecture first appeared in 1941. Considered a classic in its field, unequaled in clarity and insight, Japanese Architecture A Short History is a lucid and uncomplicated introduction to this important aspect of Japanese culture. Beginning with the earliest evidences from prehistory and ending with the Edo period, when Japan attained stature as a modern state, Japanese Architecture is as relevant today as it was in 1941. The book includes an overview of Japanese domestic architecture as it evolved through successive periods of history and perfected the forms so widely admired in the West. Of particular importance in this respect are the four concluding chapters, in which the distinctive features of the Japanese house are presented in clear detail. The architecture book also contains excellent illustrations, which show details of planning and construction.

A. L. Sadler was Professor Oriental Studies at the University of Sydney for 26 years, as well as Professor of Japanese at the Royal Military College of Australia. After retiring from academia, he returned to his native England. He died in 1971. Among his works are Shogun: The Life of Tokugawa Ieyasu, A Short History of Japanese Architecture, Japanese Tea Ceremony: Cha-no-yu, A Short History of Japan, The Ten Foot Square Hut and Tales of the Heike. Mira Locher is an architect and professor who works in both the US and Japan. Born in Pennsylvania, she has a Master of Architecture degree from the University of Pennsylvania. She worked for Team Zoo Atelier Mobile in Japan for seven years before setting up an architectural practice in partnership with Takayuki Murakami in the US. She is an Assistant Professor at the College of Architecture & Planning at the University of Utah. She is the author of Super Potato Design.
or
Not Currently Available for Direct Purchase
Copyright © 2020 American Booksellers Association