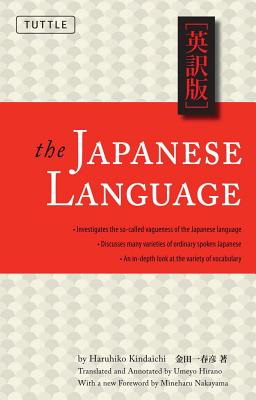 This is a book about the structure, history and evolution of the Japanese language. The Japanese Language is a classic study of one of the world's most widely used but least understood languages. Emphasizing the richness and complexity of Japanese as well as its limitations, this fine book provides a lively discussion about the uniqueness of the Japanese language. The relationship of Japanese to other languages is not well understood even by native speakers, and Professor Kindaichi sets out to define it. He concludes that Japanese is indeed only remotely related to other world languages although it shares many features in common with the languages of mainland Asia. Japanese shares with those languages a rich and detailed vocabulary for natural phenomena and an unusually complex and accurate way of expressing social relationships. Moreover, its capability to absorb innovations from abroad easily matches or exceeds that of English or German. The author, after briefly discussing the unique isolation of the Japanese language, moves on to consider the varieties of ordinary speech--dialects, jargon, sex- and role-based distinctions, and the difference between informal, formal, and literary language. He then examines the structure of Japanese pronunciations, its rhythm, and accent. The longest section of the book is devoted to the variety of the vocabulary, what can and cannot be said in Japanese. Readers who are just beginning their own study of Japanese will find this section especially fascinating, for each point is backed by examples from literature and everyday speech. Kindaichi also investigates the so-called vagueness of Japanese and traces it to its source-the unusual sentence order. This book includes:

Haruhiko Kindaichi, one of Japan's most famous linguists, was a professor at Sophia University in Tokyo. He was also a well-known radio and television personality, having won the Cultural Broadcasting Award. Kindaichi has published numerous books on Japanese linguistics. Umeyo Hirano was for many years a professor of English at Kyoto Women's University and Osaka City University. She has lectured on Japanese language and literature at Columbia University. Her previous translations include Tsutsumi Chunagon Monogatari and Kurata's Shinran.
Loading...
or
Not Currently Available for Direct Purchase