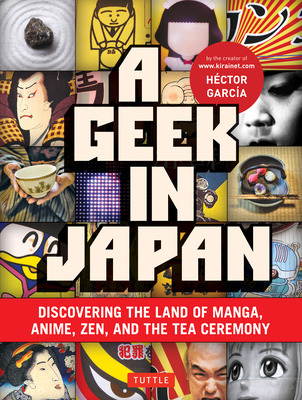 Discovering the Land of Manga, Anime, Zen, and the Tea Ceremony

For every fan of manga, anime, J-pop, or Zen, A Geek in Japan is a hip, smart and concise guide to the land that is their source. Comprehensive and well informed, it covers a wide array of topics in short articles accompanied by sidebars and numerous photographs, providing a lively digest of the society and culture of Japan. Designed to appeal to the generations of Westerners who grew up on Pokemon, manga and video games, A Geek in Japan reinvents the culture guide for readers in the Internet age. Spotlighting the originality and creativity of the Japanese, debunking myths about them, and answering nagging questions like why they're so fond of robots, author Hector Garcia has created the perfect book for the growing ranks of Japanophiles in this inspired, insightful and highly informative guide.

Praise For Geek in Japan: Discovering the Land of Manga, Anime, Zen, and the Tea Ceremony…

"Everyone who is interested in Japan will find this book fascinating."—Larry Ellison, cofounder and CEO, Oracle Corporation

"One of the funniest and yet most accurate descriptions of modern Japanese culture that I've ever seen. Highly recommended!"—Joichi Ito, director, MIT Media Lab

"Hector and I share a deep interest and affection for all things Japanese. But in my case, I only get to enjoy Japan on my business trips. Back in Spain, I like to keep in touch. And that I do reading kirainet, 'A geek in Japan.' Now you can do the same. And in book format. Enjoy!"—Martin Varsavsky, entrepreneur, founder of Fon and Safe Democracy Foundation

"Filled with a load of photos and information about Japan—a must read."—Danny Choo, Tokyo entrepreneur and owner of www.dannychoo.com

"While not a traditional guide book, A Geek in Japan certainly makes a reader want to hop on a plane to experience everything firsthand."—San Francisco Book Review

"Comprehensive and well informed, A Geek in Japan covers a wide array of topics in short articles accompanied by numerous photographs, providing a lively digest of the society and culture of Japan."—Japan Today

"Hector Garcia's A Geek in Japan is a lightweight but enjoyable romp through modern Japanese culture, seen through the eyes of its writer, an amazingly inquisitive young Spaniard living in Tokyo."—Lonely Planet

Hector Garcia was born in Spain, in 1981. After earning his MS in software engineering and working at CERN in Switzerland, he moved to Japan, where he worked on voice recognition software and later for Digital Garage, developing the technology needed for Silicon Valley startups like Twitter and Technorati to enter the Japanese market. He has been living in Tokyo since 2004 and is the creator of the popular blog www.kirainet.com
Loading...
or
Not Currently Available for Direct Purchase