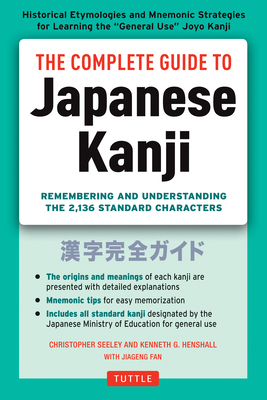 The Complete Guide to Japanese Kanji

(Jlpt All Levels) Remembering and Understanding the 2,136 Standard Characters

Learn over 2,000 Japanese Kanji characters with this user-friendly Japanese language-learning book. This unique Kanji study guide provides a comprehensive introduction to all the Kanji characters on the Japanese Ministry of Education's official Joyo (General Use) list--providing detailed notes on the historical development of each character as well as all information needed by students to read and write them. As fascinating as it is useful, this is the book every Japanese language learners keeps on his or her desk and visits over and over. This Kanji book includes:
The components which make up each character are detailed, and the Kanji are graded in difficulty according to Ministry of Education guidelines, allowing students to prioritize the order in which the Kanji are learned and track their progress. This book is essential to anyone who is planning to take the official Japanese Language Proficiency Test (JLPT) and will appeal to beginning students as well as those who wish to attain higher-level mastery of the Japanese language. It is the only book that also provides historical and etymological information about the Japanese Kanji. This latest edition has been updated to include all of the 2,136 Kanji on the expanded Joyo list issued by the Japanese government in 2010. Many entries have been revised to include the most recent research on character etymologies.

Christopher Seeley (B.A. Hons. & Ph.D., London University) has written extensively on the Japanese writing system and Chinese characters; his publications include A History of Writing in Japan (E.J. Brill, 1991, republished University of Hawai'i Press, 2000). He was a senior lecturer and Head of Department at the Asian Languages Department, University of Canterbury, Christchurch, New Zealand until his retirement in 2001. Kenneth G. Henshall is well known for the many books he has written on Japanese literature, history, and culture, as well as for his popular Japanese language-learning textbooks. A graduate of the universities of London (B.A. Hons), Sydney (Ph.D.), and Adelaide (Dip. Ed.), he is now Associate Professor of Japanese at the University of Canterbury in New Zealand. He has also taught at the universities of Auckland, Western Australia, California, and Waikato. Dr. Jiageng Fan specializes in the relationship between the Chinese and Japanese languages and scripts, focusing on the etymology of characters and the change of societal/cultural values which they reflect. He has lived, studied and taught Chinese, Japanese and English in China and Australia and has traveled extensively. After obtaining a B.A. at Guangdong University of Foreign Studies, he moved to Christchurch, New Zealand, where he earned his Ph.D. at the University of Canterbury. He believes in the freedom of mankind and the harmony between men and machines.
Loading...
or support indie stores by buying on