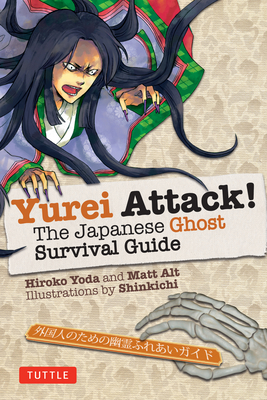 Yurei Attack is a nightmare-inducing one-stop guide to Japan's traditional ghosts and spirits. Surviving encounters with angry ghosts and sexy specters. Haunted places. Dangerous games and how to play them. And more importantly, a guided tour of what awaits in the world of the dead. Yurei is the Japanese word for ghost. It's as simple as that. They are the souls of dead people, unable--or unwilling--to shuffle off this mortal coil. Yurei are many things, but friendly isn't the first word that comes to mind. Not every yurei is dangerous, but they are all driven by emotions so uncontrollably powerful that they have taken on a life of their own: rage, sadness, devotion, a desire for revenge, or even the firm belief that they are still alive. This book, the third in the authors' bestselling Attack series, after Yokai Attack and Ninja Attack gives detailed information on 39 of the creepiest yurei stalking Japan, along with detailed histories and defensive tactics should you have the misfortune to encounter one. Japanese ghosts include:
Book 3 of 3 in the Yokai Attack series. Others include Ninja Attack and Yokai Attack .

"Matt and Hiroko have once again created an intriguing and spirited telling of a piece of Japanese mythology and cult history. Following on the back of their wonderfully successful books Yokai Attack and Ninja Attack, Yurei Attack is a fantastic read and beautifully illustrated by Shinkichi. This book will become a must for anyone that loves the unusual and wonderfully bizarre aspects of Japanese ghost stories."—Richard Taylor, founder, WETA Workshop

"Yurei Attack! The Japanese Ghost Survival Guide is the latest book by husband-and-wife author duo Hiroko Yoda and Matt Alt. Following Yokai Attack! (about monsters), and Ninja Attack!, their latest effort is an informative compendium of yurei (or ghost) stories from Japanese history, for adults and children alike. With a chatty, readable style backed up by serious scholarship and brought to life by Shinkichi's grisly illustrations, Yurei Attack! is a window into this rich vein of Japanese culture."—JapanBackPacker.com

Hiroko Yoda and Matt Alt are a couple who run a Tokyo-based translation company that specializes in producing the English versions of Japanese video games, comic books and literature. They are the co-authors of Yokai Attack! and Ninja Attack!, both originally published by Kodansha International and with new expanded editions from Tuttle Publishing.
Loading...
or support indie stores by buying on