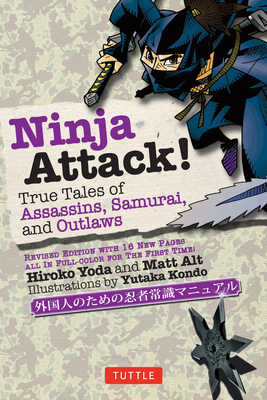 Ninja Attack introduces dozens of unforgettable real-life ninja straight out of the annals of Japanese history--many of whom are all but unknown outside their home country. Ninja masters. Solo assassins and operatives. Femme fatales as deadly as they were beautiful. Swordfighters out of legend. And the Shogun and warlords who commanded them. Each individual in this graphic novel is profiled with a full-page manga-style drawing and a dossier brimming with top-secret information, including photos, anecdotes, and dramatic stories of the individuals in action. The book covers ninja clothing styles, the types of weapons that were used, ninja tools, ninja tricks of the trade, and the basics of the ninja diet. It also includes a do-it-yourself tour of ninja related spots in modern Tokyo. Ninja Attack is everything you always wanted to know about ninja but were too afraid you'd get a shuriken in the eye to ask. Legendary ninja covered in this book include:
Book 2 of 3 in the Yokai Attack series. Others include Yokai Attack and Yurei Attack .

Hiroko Yoda and Matt Alt are a couple who run a Tokyo-based translation company that specializes in producing the English versions of Japanese video games, comic books and literature. They are the co-authors of Yokai Attack! and Yurei Attack!, both originally published by Kodansha International and with new expanded editions from Tuttle Publishing.