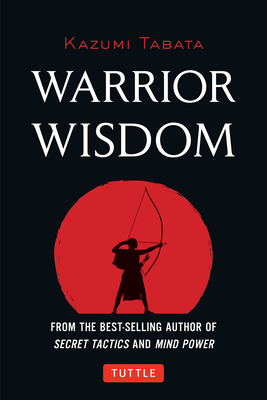 (analysis of Sun Tzu's the Art of War, Shokatsu Komei's the Tactics, and More)

Martial arts legend Grandmaster Kazumi Tabata presents a brilliant analysis for modern readers of the most famous work of martial strategy, The Art of War by Sun Tzu. Warrior Wisdom also includes an analysis of the lesser-known The Tactics of Shokatsu Komei, as well as additional warrior tactics that have enabled the author to become a Grandmaster in Shotokan Karate and one of the most influential martial artists in North America. Since he was sent to the United States by his master Isao Obata in the 1960s to promote Karate, Tabata has continually refined his teaching methods and distillations of classic Eastern knowledge to enable Westerners to understand and take to heart these valuable lessons truly. This martial arts strategy book should be read by anyone interested in learning the ancient wisdom of these timeless classics to overcome challenges and excel in everything they do--whether in the martial arts, in business, or in everyday life.

Kazumi Tabata is a Grand Master in the Shotokan and Shorinji styles of Karate. He was sent to this country in the 1960s by his teacher Professor and Master Isao Obata (senior student of Gichin Funakoshi) to promote Karate in the United States. Shortly after his arrival in this country, he established and continues to serve as the Chief Instructor of the North American Karate Federation, consisting of schools throughout the United States, Bermuda, and Europe, and the New England Collegiate Karate Conference. Over the years, Master Tabata has had a wide impact on the martial arts, including training the local tactical police force, authoring several books including Secret Tactics and Mind Power, and hosting the first Boston-Asian Festival in 1993.
or support indie stores by buying on
Copyright © 2020 American Booksellers Association