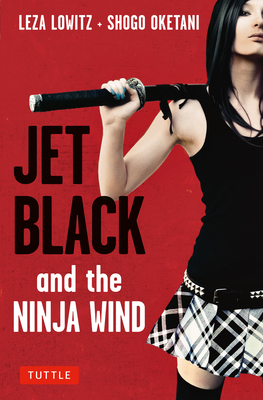 Praise For Jet Black and the Ninja Wind…

"Action, adventure, and artistry join forces in this enthralling story of a teen girl descended from ninjas. Jet Black's quest to find a hidden treasure, and to save her ancestors' history and homeland, takes her on a heart-pounding journey from New Mexico to Japan. Along the way she uncovers layers of history and family secrets, and discovers how to use ninjutsu to survive. Readers will cheer for this refreshingly original action heroine as she travels across cultures and into her heart to find hidden treasures of her own: power, courage, and family."—Diana Renn, author of Tokyo Heist

"This fast-paced whirlwind story of the teenage Jet, inheritor of ninja skills through her Japanese mother, spins the reader through history, legend, Buddhism and modern Japan. With vivid description, Lowitz and Oketani have created a visual experience akin to watching an epic thriller film. Five stars!"—Liza Dalby, author of Geisha, Hidden Buddhas and The Tale of Murasaki

"Looking for a high octane international adventure? You've found it. The Lowitz-Oketani writing team has birthed a spin-kicking hapa heroine who can read the minds of animals, make herself invisible, and sword-fight with the best of them. Also, she's a ninja—the only one who can save her people. What are you waiting for? Dive in!"—Suzanne Kamata, author of Gadget Girl: The Art of Being Invisible

"Jet Black and the Ninja Wind really drew me in!

"It's a page-turner rich in striking ideas, unexpected action and fascinating cultural and language secrets! This pacey, intelligent yarn brings together feisty young modern characters, epic derring-do and an ancient mystery. Jet Black brush-strokes for us a wide, credible world with an engaging, accessible voice that also packs sword-cut precision. Few debut novels exude such powerful and unique magic and romance! Let the wind blow!—Simon Higgins, author of Moonshadow: Rise of the Ninja and the Tomodachi series

"In the first book of their new series, Jet Black and the Ninja Wind, Lowitz and Oketani combine their talents to concoct a fascinating new world for young readers. It's a world filled with mystery, mysticism, magic, and martial arts action, and it's also a wild and exciting ride. When her mother dies, Jet Black—a half-Japanese 17-year-old raised on a Navajo Reservation—is forced to realize her identity and destiny as a ninja, which takes her deep into both modern and ancient Japan. Through Jet Black, we are introduced to multiple worlds of colorful characters and exciting situations, where ethnicity, culture, and history all intersect and merge. Kudos to Lowitz and Oketani for providing such a heady and addictive mix of entertainment. Read one book in this series, and you'll want more."—Frederik L. Schodt, award-winning writer and translator, including Professor Risley and the Imperial Japanese Troupe

"Jet Black and the Ninja Wind melds intrigue, magic and vivid characters with gorgeous description and plenty of heart-stopping action. Masterfully written, this debut from Leza Lowitz and Shogo Oketani will leave readers pleasantly haunted and hungry for more."—Linda Gerber, author of Now and Zen and The Death by Bikini Mysteries

"Adventure, fantasy, ancient wisdom, and imminent danger—Jet Black meets them all head on. Like the Hunger Game's Katniss Everdeen, she is a fighter with heart. A new teen hero has arrived."—Barry Lancet, author of Japantown

"How wonderful to find such a story of inspiration as Jet Black and the Ninja Wind, revealing how heroism can be born even from roots in confusion and self-doubt. Enjoy the read and then let Jet Black's story inspire you to ride your wind as she did hers. Find your gift. Live your promise."—Stephen K. Hayes, Black Belt Hall of Fame, author of The Ninja and Their Secret Fighting Art and The Ninja Defense