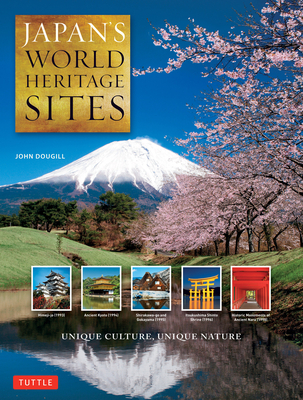 "It's a nice tome for armchair travel, whisking you off around the country from where you sit--or time travel, taking you back to that life-changing decade-lost holiday and old friends."--The Japan Times Visit the most compelling cultural and nature sites in all of Japan with this beautifully photographed travel guide. In Japan's World Heritage Sites, readers are introduced to the temples, gardens, castles and natural wonders for which Japan is so justly renowned--all of those now declared to be Unesco World Heritage Sites. Author John Dougill describes each site in detail, stating why they were singled out by Unesco, the current number and types of sites, the application process, how the sites have been selected, and how difficult it is to be given the special status of a World Heritage Site. Dougill traveled to all of the sites in Japan to research this book. Because the Japanese archipelago extends from Siberia all the way down to Taiwan, Dougill describes how his journey led him from the sub-Arctic to the sub-tropical zones. These are without a doubt the most interesting sites that Japan has to offer, including the following:
Readers will learn how Japan first became involved with the World Heritage Sites program back in 1993, the importance of these designations, and their popularity in Japan, where they are visited by millions of people annually, both Japanese and foreigners.

John Dougill is a professor at Ryukoku University in Kyoto. He has authored fourteen Japanese college textbooks as well as Kyoto: A Cultural Guide and In Search of Japan's Hidden Christians. Find him at greenshinto.com
or support indie stores by buying on
Copyright © 2020 American Booksellers Association