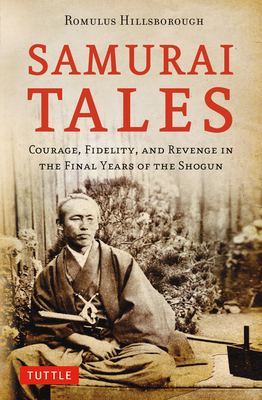 Courage, Fidelity, and Revenge in the Final Years of the Shogun

Samurai Tales is about the legendary men from the samurai class who fought for the helm of power in 19th century Japan. These are stories of courage, honor, fidelity, disgrace, fate, and destiny set in the bloody time of political change and social upheaval in the final years of the Shogun. The final years of the samurai were an age of unprecedented turmoil and bloodletting in Japan. They heralded the end of nearly three centuries of rule under the Tokugawa Shogun. The rule of law was deteriorating, assassination and murder were rampant, and inner-fighting among the warrior class embroiled the nation. After the United States forced an end of over two hundred years of Japanese isolation, two contrasting philosophies were embraced by the samurai. On one side were those who would overthrow the shogun and restore the Emperor to power. Opposing the revolutionaries were the allies of the Tokugawa Bakufu, headed by the shogun. While the shogun's men clashed violently with the revolutionaries, as samurai they shared with each other an allegiance to an unwritten code of honor which governed the ways they lived and died. Theirs was a stoic system of morals which condoned suicide, vengeance and, in some cases, cold-blooded murder. Samurai Tales is, to quote author Romulus Hillsborough, accurate portrayals of the heart and soul of the samurai, the social and political systems of whom have, like the Japanese sword, become relics of a distant age, but the likes of whose nobility shall never again be seen in this world. In recounting what he terms the great epic which was the dawn of modern Japan, Hillsborough delves deeply into the psyche of the men of the samurai class. This book would serve well on the bookshelves of martial artists, those interested in samurai culture, or those interested in Japanese history.

Romulus Hillsborough is an acclaimed expert in the field of Japanese history and culture who lived in Japan for over fifteen years. He has appeared numerous times on television and radio including The History Channel and NHK television. Fluent in spoken and written Japanese, he is the author of Ryoma: Life of a Renaissance Samurai, Samurai Revolution, Samurai Assassins and The Shogun's Last Samurai Corps. Hillsborough lives in San Francisco, California.
Loading...
or support indie stores by buying on