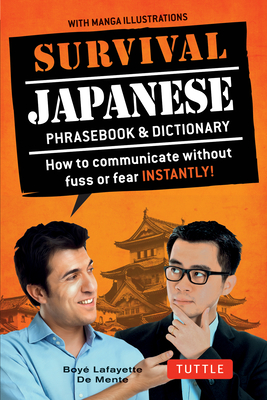 How to Communicate Without Fuss or Fear Instantly! (a Japanese Phrasebook)

A handy Japanese phrasebook and guide to the Japanese language, Survival Japanese contains basic vocabulary necessary for traveling in Japan. This book contains all the necessary words and phrases for speaking Japanese in of setting. Perfect for students, tourists, or business people learning Japanese or traveling to Japan, it also contains a beginner guide to the Japanese language, allowing for a deeper understanding of Japanese than a typical Japanese phrasebook or Japanese dictionary. The phrasebook is broken into two sections: Common Japanese Expressions and Key Words, and Japanese Pronunciation Guides for Key Japanese Names and Signs. All Japanese words and phrases are written in Romanized form as well phonetically, making pronouncing Japanese a breeze. For example, the word for "hotel," hoteru is also written as hoe-tay-rue. Authentic Japanese script (Kanji and Kana) is also included so that in the case of difficulties the book can be shown to a native Japanese-speaker. Key features of Survival Japanese include:

Boye Lafayette De Mente has been involved with Japan, China, and Korea since the late 1940s as a member of a U.S. intelligence agency, student, trade journalist, editor, and author working out of Tokyo, Seoul, Hong Kong, and Singapore. He is a graduate of Jochi University in Tokyo and The American Institute for Foreign Trade (now Thunderbird: The School of Global Management). His 70-plus books include Japan's Cultural Code Words, Business Guide to Japan, and Japan Unmasked.
or
Buy Here
Copyright © 2020 American Booksellers Association