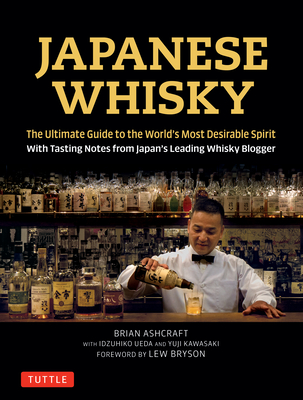 **Winner Gourmand World Cookbook Award 2019** In his new book, journalist Brian Ashcraft digs into the short but colorful history of the Japanese liquor and the process that differentiates Japan's labels from their Western cousins. Plus, whisky authority Yuji Kawasaki shares tasting notes for more than a hundred bottles. --Travel + Leisure Japanese whisky has been around for less than a century--but is now winning all the major international awards. How did this happen and what are the secrets of the master distillers? This whisky book divulges these secrets for the first time. Japanese Whisky features never-before-published archival images and interviews chronicling the forgotten stories of Japan's pioneering whisky makers. It reveals the unique materials and methods used by the Japanese distillers including mizunara wood, Japanese barley, and novel production methods unique to Japan. It also examines the close cultural connections between Japanese scotch and whisky drinkers and their favorite tipples. For the first time in English, this book presents over a hundred independently scored tastings from leading Japanese whisky blogger, Yuji Kawasaki, shedding new light on Japan's most famous single malts as well as grain whiskies and blends. Japan expert Brian Ashcraft and photographer Idzuhiko Ueda crisscrossed Japan visiting all the major makers to talk about past and present whisky distillers, blenders and coopers. Japanophiles, whisky lovers, travelers, and history buffs will all find something fascinating within these pages, including: Japanese Whisky not only explains how the country's award-winning whiskies are made, but also the complete whisky history and culture, so readers can truly appreciate the subtle Japanese whiskies they're drinking and buying. Kanpai

Brian Ashcraft is a senior writer for the video-game site Kotaku and a columnist at The Japan Times. Ashcraft was previously a contributing editor at Wired magazine; his work has also appeared in Popular Science, the Guardian, and the design journal Metropolis, as well as numerous other publications worldwide. He has authored several books on Japanese culture, including Japanese Tattoos: History * Culture * Design. Originally from Texas, he has called Osaka home since 2001. Whisky reviewer Yuji Kawasaki launched his leading Japanese-language blog One More Glass of Whisky in 2013 after feeling that there weren't enough independent voices in the country's online whisky community. His blog is one of the most popular sites for whisky tasting notes. Photographer Idzuhiko Ueda has been documenting Japan's traditional arts from bunraku to its local sake production for over three decades. He currently runs his own photography studio, specializing in architectural photography. Foreword writer Lew Bryson has been writing about beer and spirits for over 20 years and was the editor of Whisky Advocate magazine from 1996 to 2015. He is the author of six books including the bestseller, Tasting Whiskey--a synthesis of over two decades of writing about this amazing drink. He lives in Bucks County, PA, just north of Philadelphia.
Loading...
or support indie stores by buying on