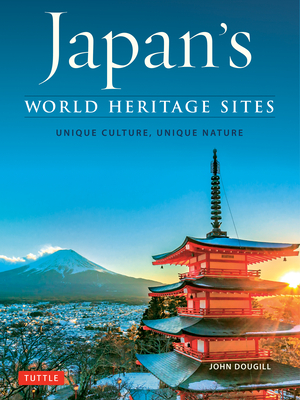 Japan's World Heritage Sites presents the exquisite temples, shrines, gardens, castles and natural wonders found throughout Japan which have now been declared UNESCO World Heritage Sites. This new edition has more convenient size and includes many newly-designated UNESCO sites including:
Japan expert John Dougill personally traveled to each of these sites to research this book. He tells how his journey led him from the sub-Arctic island of Hokkaido to the sub-tropical islands of the Okinawan archipelago and beyond. Tag along as he describes each place in loving detail and talks about its special historical and cultural features, including:
Readers will learn how Japan became involved with the World Heritage Sites program back in 1993, the importance of these designations, and their popularity in Japan and abroad today. Whether you are planning to travel to Japan or just enjoy learning more about this history of this unique land, Japan's World Heritage Sites is sure to inspire.

John Dougill is a professor at Ryukoku University in Kyoto. He has authored fourteen Japanese college textbooks as well as Kyoto: A Cultural Guide, In Search of Japan's Hidden Christians and Zen Gardens and Temples of Kyoto.
or
Buy Here
Copyright © 2020 American Booksellers Association