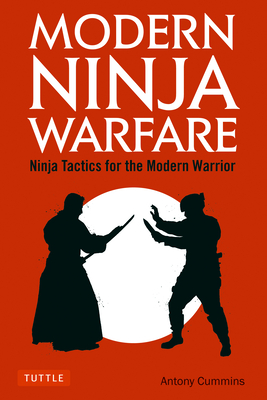 Ninja Tactics for the Modern Warrior

Modern Ninja Warfare takes a contemporary look at the stealthy methods of the Ninja (Shinobi). Ninja historian Antony Cummins, himself a skilled martial artist, takes a detailed and realistic look at the Ninja, their methods and their role in the medieval Japanese military, as well as how they compare to today's Special Forces and covert military groups. Cummins collected information from members of Special Ops, police forces, CIA and more about the techniques they use in the twenty-first century, and compares it against his extensive knowledge and research of historical ninjutsu methods. Readers will get a detailed look at the defensive strategies, engagement against specific threats, intelligence gathering, territorial concerns, mental focus and the spiritual mind-control techniques of these invisible warriors--both of the past and present. With over 100 striking illustrations that vividly portray the Ninjas' secret world, this book shines new light on their shadowy methods. In the process, the mythical image of the Ninja is washed away revealing the reality of these commando-spies of medieval Japan.

Antony Cummins heads the Historical Ninjutsu Research Team, a project that documents, translates and publishes medieval documents pertaining to the Shinobi of Japan. As a world-renowned ninja historian, his background as a historian gives him a unique insight into their mysterious world. Cummins has revived an old samurai school of war, Natori-Ryu, with the aim of educating people on historical Japanese warfare. His aim is to establish a correct understanding of Japanese military arts and to bring about a deeper knowledge of, and respect for, Japanese arts. A trained martial artist, he is the author of nearly a dozen books on ninja and martial arts, including Tuttle's True Path of the Ninja and Samurai and Ninja. He has been featured in a number of Smithsonian Channel videos, including Ninja: Shadow Warriors, Samurai Head Hunters and Samurai Warrior Queens. Jayson Kane was born in South Africa and studied art, design and printmaking in Manchester, UK. He has worked on several of Antony Cummins' books including internal illustrations for Iga and Koka Ninja Skills, The Illustrated Guide to Viking Martial Arts and Ninja Skills; front cover design for The Secret Traditions of The Shinobi and The Lost Warfare of India: An Illustrated Guide; and cover concept design for True Path of The Ninja.
or
Buy Here
Copyright © 2020 American Booksellers Association