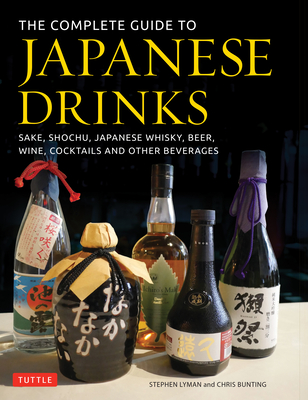 The Complete Guide to Japanese Drinks

**2020 James Beard Award Nominee**
**2020 Gourmand Cookbook Award Winner for Japan in Spirits Books** Drink your way through Japan (even from home) with the help of this book Japan is home to some of the world's most interesting alcoholic beverages--from traditional Sake and Shochu to Japanese whisky, beer, wine and cocktails that are winning global acclaim and awards. In this comprehensive survey of Japanese drinks, experts Stephen Lyman and Chris Bunting cover all the main types of beverages found in Japanese bars and restaurants, as well as supermarkets and liquor stores around the world. The book has chapters on Sake, Shochu, whisky, wine, beer, Awamori (a moonshine-like liquor from Okinawa), Umeshu plum wine and other fruit wines. There is also a fascinating chapter on modern Japanese-style cocktails--complete with recipes so you can get the authentic experience, including: Sour Plum CordialSakura MartiniImproved Shochu CocktailFar East Side Cocktail
Thorough descriptions of the varieties of each beverage are given along with the history, production methods, current trends and how to drink them. Detailed bar and buyer's guides at the back of the book list specialist establishments where readers can go to enjoy and purchase the drinks, both in Japan and cities around the world, including London, Paris, New York, San Francisco, Chicago, Washington DC, Shanghai and more This is an indispensable book for anyone interested in brewing, distilling, new cocktails or Japanese culture, travel and cuisine. Kampai Cheers.

Stephen Lyman was minding his own business, enjoying life in New York City as an Associate Professor at Weill Cornell Medical College when he was unexpectedly introduced to Japanese shochu at an izakaya in the Chelsea neighborhood of Manhattan. Over the next decade he visited Japan more than twenty times, visiting more than a hundred shochu distilleries, sake breweries and other alcohol producers in more than twenty Japanese Prefectures. In 2013 he began interning at a small shochu distillery in Kagoshima Prefecture. He subsequently became the first graduate of the Sake School of America's Shochu Adviser Course and a kikisakeshi (sake sommelier) through Sake Service International. In 2016 he was named the first Honkaku Shochu Ambassador by the Japanese government through the Cool Japan program. He now spends about half his time in Kyushu in Southern Japan where he can be found cycling around and exploring local food, drink, and culture. Chris Bunting has worked in London and Japan for publications including the Asahi Shimbun, Times and Independent. He developed his love of Japanese alcohol while living in Tokyo and is the author of Drinking Japan. He currently lives in Yorkshire in the UK.
Loading...
or support indie stores by buying on