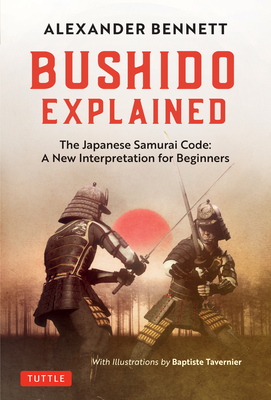 The Japanese Samurai Code: A New Interpretation for Beginners

This seminal work by historian Alexander Bennett presents a broad overview of the Japanese "Way of the Warrior" as it is expressed in scores of classical Japanese texts written by famous Samurai themselves. Bennett's analysis of these writings shows that the essential meaning of Bushido, the Samurai's code of conduct and ethics, evolved significantly over time--from the 12th century when the warrior class was elevated to become an elite group, to the 19th century when the Samurai class was suddenly disbanded. Bushido Explained takes a visual approach to presenting important concepts and terminology, helping readers easily navigate the complex world of the Samurai. The text is written in a highly accessible style, with sidebars presenting interesting concepts, facts and important Samurai figures who were central to Bushido's evolution. The different types of Bushido--which vary by region, time period and Samurai rank--are presented with over 300 informative diagrams and illustrations. No other book offers such a wide-ranging, yet clear analysis of Bushido--debunking myths and misconceptions about who the Samurai truly were. Bushido Explained presents a precise overview of Samurai ideals and culture in a logical, chronological order. Author Alexander Bennett--a professor of Japanese history, martial arts and Budo theory at Kansai university in Japan--uses this information and teaching methods in his Japanese Studies: Introduction to Bushido class. Now, readers all over the world can sit in on the unique lesson.

Alexander Bennett is a professor of Japanese history, martial arts and Budo theory at Kansai University. He co-founded and publishes Kendo World, the first English-language journal dedicated to Kendo. He holds black belts in several martial arts--Kendo Kyoshi 7-dan, Iaido 5-dan and Naginata 5-dan. His published works include Japan: The Ultimate Samurai Guide and Hagakure: The Secret Wisdom of the Samurai. Baptiste Tavernier is an artist and martial artist based in Japan. He has studied martial arts at the International Budo University in Chiba for 7 years and has written several articles and books on the topic of martial arts. He has exhibited his artwork in cities worldwide including Tokyo, Taipei and Miami.
or support indie stores by buying on
Copyright © 2020 American Booksellers Association