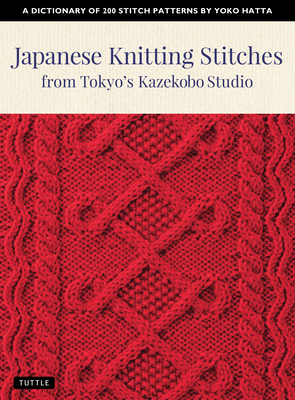 A Dictionary of 200 Stitch Patterns by Yoko Hatta

This exciting new Japanese stitch dictionary is from popular designer Yoko Hatta--the founder and driving force behind the Kazekobo Studio. Though this is her first book in English, her work already has an extensive following in Western countries--more than 1,000 of her designs can be seen on Ravelry.com. Hatta is one of several Japanese knitters whose patterns and designs have sparked an explosion of interest in Japanese knitting techniques and aesthetics around the world. Her work in knitwear design spans more than thirty years, and knitters love her modern-yet-timeless, fun-yet-classy styles. This book presents her 200 favorite Kazekobo stitch patterns--a delightful selection of multipurpose knit-and-purl, lace, cable, Aran and rib & twist stitches in solids and motifs. Sample projects give knitters a chance to practice Hatta's techniques. These include: Experienced knitters will find a wealth of unique patterns just waiting to be brought to life. A guide to the basic symbols shows how to knit the stitches, step-by-step. Originally published in Japanese by Nihon Vogue, whose books have brought the designs of artists such as Hitomi Shida, Keiko Okamoto and others to knitters around the world, this book will be a much-anticipated addition to every knitter's library.

Yoko Hatta is the designer behind the Japanese knitting studio Kazekobo. A prolific artist whose work spans over thirty years, she has written many knitwear books and stitch dictionaries, and contributed to numerous magazines and compilations in both Japan and the US. She is a contributor to Brooklyn Tweed and Vogue Knitting, and over 1,000 of her designs can be seen on Ravelry.com. Her designs are known for adding contemporary flair to classic garments. Translator and introduction writer Cassandra Harada is a fiber artist living in Japan, and spends most of her time knitting, and spinning for herself and good friends. Originally from the US, Cassandra has been in Japan for about 15 years and thoroughly enjoys studying the language and culture of her adopted home. Cassandra teaches knitting and spinning in Japan and America and occasionally publishes her own design work.
or support indie stores by buying on
Copyright © 2020 American Booksellers Association