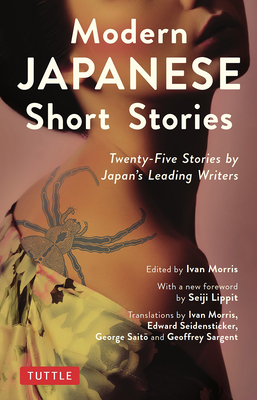 Modern Japanese Short Stories is a remarkable collection of Japanese stories from the pioneers of contemporary Japanese literature. This volume's twenty-five stories by as many authors display a wide range of style and subject matter--offering a revealing picture of modern Japanese culture and society. The stories in this anthology include: Featuring a new foreword by Japanese literary scholar Seiji Lippit and striking woodcut illustrations by Masakazu Kuwata, the stories are translated by the editor, Ivan Morris, and Edward Seidensticker, George Saito, and Geoffery Sargent. This collection of short stories shows why Japanese literature is so highly valued today--it teaches not only about Japan, but about the human condition and the possibilities of art.

Ivan Morris (1925-1976) was a highly regarded figure in the field of Japanese studies. He was a professor at Columbia University from 1960 to 1973 where he was head of the Department of East Asian Languages and Cultures. He is known for his work on Japanese history and literature, though his numerous books, articles, and translations reflect the familiarity he had with all aspects of Japan. Seiji M. Lippit is Professor of Asian Languages & Cultures at the University of California, Los Angeles. He is the author of Topographies of Japanese Modernism and the editor of The Essential Akutagawa. He has written widely on 20th century Japanese literature and translated numerous works of fiction and criticism. Masakazu Kuwata is a prolific artist who has created illustrations for many books during his long career, including Incredible Japan and The Life of an Amorous Man. His greatest work, "Pieta of Japan," is displayed in the Collection of Modern Religious Art at the Vatican Museum.
or
Buy Here
Copyright © 2020 American Booksellers Association