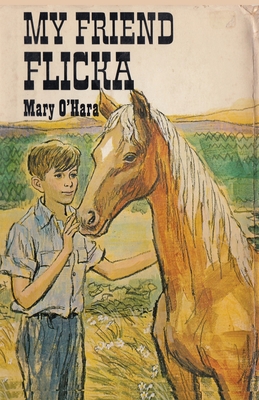 Ken McLaughlin was only eleven years old, but for as long as he could remember he had wished for nothing more than his very own cot. He had tried to do the chores well around his father's horse ranch, but whenever he was alone he found his thoughts drifting off to that one with....And as a result, he usually made some mistake like forgetting to be on time for dinner, or leaving the clutch strap too lose on the horse he was riding. Then his father would get angry and Ken felt he would never have his own colt.

One morning at the breakfast table, though, Ken heard his father say something that almost made Ken fall off his chair. "Ken, I'm giving you one week to look over all the new yearlings and choose one for yourself."

What a wonderful surprise He was to have his very own colt to train and care for and ride to his heart's content.

By the end of the week Ken had made his choice - a golden brown filly with a flowing white main and tail. But what about a name for the horse? Then remembered Gus, his hired hand, had said when the filly was a new-borne colt.

"Why its Swedish for little girl."

And now Ken had a name for his colt. I'm going to call her Flicka he announced proudly at dinner that night.

This is the beginning of the exciting heartwarming adventure of a boy and his horse, and how they grew up together - a story that in a few short years had become one of the most popular classics for young readers.