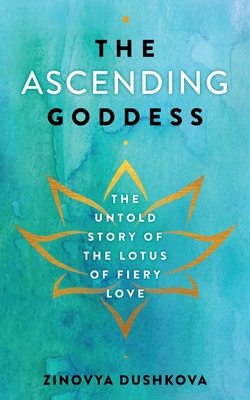 The Untold Story of the Lotus of Fiery Love

Is God a Woman?

Named as one of the 100 Most Spiritually Influential Living People by Watkins Mind Body Spirit, Zinovya Dushkova, Ph.D., continues to reveal sacred texts that have been immortalized in the secret depositories of Shambhala. This time her new work represents a synthesis from the pages of the Book of Dzyan and the Book of Fiery Destinies, which tell about the creation of our world by Woman - the Goddess Lakshmi, who is known in Gnostic Christianity as Sophia, the bride of Christ.

The Ascending Goddess will allow you a glimpse into those distant times when our planet was still in the process of creation. The Divine Man and Woman - Christ and Sophia, inseparably united in the Heavens - turned their gaze to the Earth with the aim of sowing the seed of Love there. So the Woman was the first to descend to the planet - not only to breathe life into it, but also to prepare the soil in human hearts for the Coming of her beloved Man.

Elucidating the path of Lakshmi on the Earth, The Ascending Goddess will help you understand in a new way the spiritual path which every woman is destined to traverse, along with the rest of our planet's humanity. This book will fundamentally change your attitude towards so-called wrathful Deities and will also tell you about the structure of the Hierarchy of Light, revealing the secret purpose for the descent of the Supreme Gods from the Heavens and their lives among ordinary people - even today