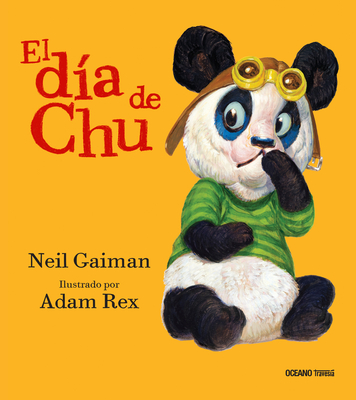 Chu is a little panda . . . but his sneezes aren’t so little. When he sneezes, anything could happen. What will it be today?

"Rex's gorgeous, rich illustrations depict an enchantingly old-fashioned world of hilariously anthropomorphized beasts. The satisfying chaos that ensues when an "Achoo!" turns everything upside down will have readers giggling again and again." —School Library Journal, on the English language edition

"Kids will find the idea of a monstrous sneeze funny, and it may prompt some attempts of their own. Rex’s richly detailed illustrations are brimming with fantastic touches. Share this one at toddler storytime for lots of giggles, or one-on-one for spotting details in the art." —Booklist, on the English language edition

"Gaiman’s comic timing gets a boost from strategic book design and from Rex’s hyperreal paintings, which emphasize Chu’s round, fuzzy form and apparent harmlessness. Gaiman and Rex deliver a classic one-two-three punch, making hay from the notion that a cuddly baby panda is not to be trusted." —Publishers Weekly, starred review, on the English language edition

Neil Gaiman is an author whose awards include the Newbery Medal, the Carnegie Medal, and the Bram Stoker Award. His fantasy novels for adults include American Gods, Neverwhere, and Stardust, as well as the short story anthology Smoke and Mirrors. Coraline is his most acclaimed novel. Adam Rex is an American designer, illustrator, and author. His books Frankenstein Makes a Sandwich, followed by Frankenstein Takes the Cake, which are collections of stories about monsters and their problems, the former of which is a New York Times best-seller.
Loading...
or
Not Currently Available for Direct Purchase