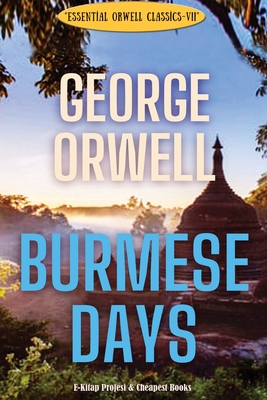 Burmese Days is the first novel by English writer George Orwell, published in 1934. Set in British Burma during the waning days of Empire, when Burma was ruled from Delhi as part of British India, it is "a portrait of the dark side of the British Raj." At the centre of the novel is John Flory, "the lone and lacking individual trapped within a bigger system that is undermining the better side of human nature." The novel describes "both indigenous corruption and imperial bigotry" in a society where, "after all, natives were natives-interesting, no doubt, but finally...an inferior people".

Burmese Days was first published "further afield," in the United States, because of concerns that it might be potentially libelous; that the real provincial town of Katha had been described too realistically; and that some of its fictional characters were based too closely on identifiable people. A British edition, with altered names, appeared a year later. Nonetheless, Orwell's harsh portrayal of colonial society was felt by "some old Burma hands" to have "rather let the side down". In a letter from 1946, Orwell wrote, "I dare say it's unfair in some ways and inaccurate in some details, but much of it is simply reporting what I have seen".

Burmese Days is set in 1920s imperial Burma, in the fictional district of Kyauktada, based on Kathar (formerly spelled Katha), a town where Orwell served. Like the fictional town, it is the head of a branch railway line above Mandalay on the Ayeyarwady (Irrawaddy) River. As the story opens, U Po Kyin, a corrupt Burmese magistrate, is planning to destroy the reputation of the Indian, Dr Veraswami. The doctor hopes for help from his friend John Flory who, as a pukka sahib (European white man), has higher prestige. Dr Veraswami also desires election to the town's European Club, of which Flory is a member, expecting that good standing among the Europeans will protect him from U Po Kyin's intrigues. U Po Kyin begins a campaign to persuade the Europeans that the doctor holds anti-British opinions in the belief that anonymous letters with false stories about the doctor "will work wonders". He even sends a threatening letter to Flory.

John Flory, a jaded 35-year-old teak merchant with a birthmark on his face in the shape of a ragged crescent, spends three weeks of every month acquiring jungle timber. Friendless among his fellow Europeans and unmarried, but with a Burmese mistress, he has become disillusioned with life in an expatriate community centred round the local European Club in a remote provincial town. At the same time, he has become so embedded in Burma that it is impossible for him to leave and return to England. Flory has one good friend, the Indian, Dr Veraswami, whom he often visits for what the Doctor delightedly calls "cultured conversation". But when Flory dismisses the British as mere moneymakers, living a lie, "the lie that we're here to uplift our poor black brothers instead of to rob them," he provokes consternation in the doctor, who defends the British as the efficient administrators of an unrivalled empire. Toward his mistress, Flory is emotionally ambivalent: "On the one hand, Flory loves Burma and craves a partner who will share his passion, which the other local Europeans find incomprehensible; on the other hand, for essentially racist reasons, Flory feels that only a European woman is acceptable as a partner".