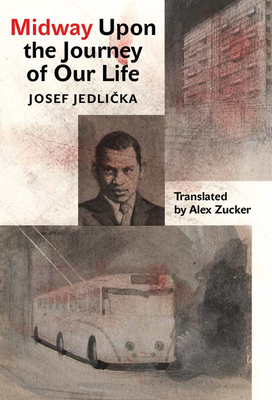 Midway Upon the Journey of Our Life (Modern Czech Classics)

Written between 1954 and 1957 and treating events from the Stalinist era of Czechoslovakia’s postwar Communist regime, Midway Upon the Journeyof Our Life flew in the face of the reigning aesthetic of socialist realism, an anti-heroic novel informed by the literary theory of Viktor Shklovsky and constructed from episodes and lyrical sketches of the author and his neighbors’ everyday life in industrial north Bohemia, set against a backdrop of historical and cultural upheaval.

Meditative and speculative reflections here alternate and overlap with fragmentary accounts of Jedlicka’s own biography and slices of the lives of people around him, typically rendered as overheard conversations. The narrative passages range in chronology from May 1945 to the early 1950s, with sporadic leaps through time as the characters go about the business of “building a new society” and the mythology that goes with it. Due to its critical view of socialist society, Midway remained unpublished until 1966, amid the easing of cultural control, but a complete version of this darkly comic novel did not appear in Czech until 1994.

“One of the outstanding works of 1950s Czech literature, Jedlicka’s Midway Upon the Journey of Our Life is a book of and out of its time. . . . This excellent translation by Zucker, elegantly published by Karolinum Press, is its first into English. . . . Jedlicka brings two senses of the avant-garde into opposition: on the one hand, architectural modularity and symmetry; on the other, the experimental, playful, digressive modes of literary modernism. . . . The form the book itself becomes an act of resistance, and dominates over plot or character. . . . Jedlicka at once yearns for and repudiates the pastoral and the lyric, in a critique both literary and ecological. . . . His interrogation of the complicity of political, architectural, and literary structure makes this work important not only as a document of a neglected period of Czech literature, but as a stimulating piece of formal invention.”
— Kathryn Murphy, University of Oxford

“An overlooked classic. . . . [Midway is] a key work in the Czech literary cannon. . . . The characters who populate Jedlicka’s Collective House are suspicious of one another, envious, and violent. Human nature fails to live up to the collectivist ideal, and its darker side is more pronounced for trying. . . . Lyrical, poetic . . . at once beautiful and disorienting.”
— Emily Thompson

"Midway upon the Journey of Our Life constitutes a dark, bitter and unrelenting assault on the Stalinist project, its human cost, and particularly the intellectual self-deception which sustained it. While thematically anticipating later Czech ‘texts of disillusion,' Jedlicka’s original writing style deliberately confronts the Soviet ‘literature of fact’ of the 1920s (here parodied as the ‘poetics of a policeman’) with elements derived from Czech poetism and surrealism. Zucker’s excellent translation captures all of thi. . . . A valuable addition to the catalogue of modernist Czech writing in translation."
— Justin Doherty, Trinity College Dublin

“Bitterly parodies the techniques of ‘literature of fact’ in an attempt to show how the avant-garde’s utopian dreams of a new art for a new society were realized, paradigmatically in the northern Bohemian borderlands, in dystopian art for a dystopian society and landscape.”
— Rajendra Chitnis, University of Bristol, from the afterword

Josef Jedlička (1927–1990) was a Czech novelist and essayist. Alex Zucker is a translator of Czech literature whose translation of Jáchym Topol’s The Devil’s Workshop received the English PEN Award for Writing in Translation.
Loading...
or
Not Currently Available for Direct Purchase