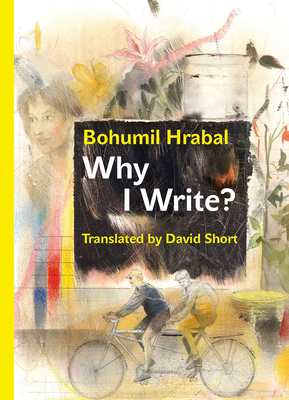 Why I Write? (Hardcover)

This collection of the earliest prose by one of literature’s greatest stylists captures, as scholar Arnault Maréchal put it, “the moment when Hrabal discovered the magic of writing.” Taken from the period when Bohumil Hrabal shifted his focus from poetry to prose, these stories—many written in school notebooks, typed and read aloud to friends, or published in samizdat—often showcase raw experiments in style that would define his later works. Others intriguingly utilize forms the author would never pursue again. Featuring the first appearance of key figures from Hrabal’s later writings, such as his real-life Uncle Pepin, who would become a character in his later fiction and is credited here as a coauthor of one piece, the book also contains stories that Hrabal would go on to cannibalize for some of his most famous novels. All together, Why I Write? offers readers the chance to explore this important nascent phase of Hrabal’s writing.

Expertly interpreted by award-winning Hrabal translator David Short, this collection comprises some of the last remaining prose works by Hrabal to be translated into English. A treasure trove for Hrabal devotees, Why I Write? allows us to see clearly why this great prose master was, as described by Czech writer and publisher Josef Škvorecký, “fundamentally a lyrical poet.”

Bohumil Hrabal (1914–97) was born in Brno, Czechoslovakia, and studied law. By his death, he was ranked among the greatest Czech writers of the twentieth century. His novel Closely Watched Trains was turned into an Academy Award–winning film. David Short is a retired teacher of Czech and Slovak, the author of a popular Czech textbook, the coauthor of a number of publications in the field of linguistics, and a prolific translator from Czech. For his work with Czech literature he was awarded the Jiří Theiner Prize.

"In Why I Write?, a motley crew of carousers play drunken pranks and tell each other wild stories. . . . In place of the drab realism that the regime demanded, Hrabal offered dizzying embellishments and dazzling augmentations. He drew early inspiration from the surrealists, and Why I Write? is peppered with references to obscure figures of the movement. But, even in his early stories, he departed from precedent to perfect the distinctive method that he called pabeni, a term that translates to something like palavering: roughly, the kind of meandering chatter that we engage in when we strike up conversations with strangers. . . . The book sometimes glimmers in anticipation of Hrabal’s later virtuosity."
— Becca Rothfeld

"A collection of formative fiction from a writer whose work has earned comparison with Joyce and Beckett. . . . The tone throughout is dark comedy, exploring human absurdity and carnality amid a universe that is at best senseless, if not malevolent. 'You insist the world can be perfect only in its totality,' says one character, 'meaning that good and evil are both necessary, otherwise it would come crashing down.' Early work from a writer who merits a larger readership."
— Kirkus Reviews

“One of the great prose stylists of the twentieth century; the scourge of state censors; the gregarious bar hound and lover of gossip, beer, cats and women (in roughly that order). . . . In Hrabal’s work beauty, pity, sorrow and high silliness come tightly braided.”
— Parul Sehgal

“Our very best writer today.”
— Milan Kundera, author of "The Unbearable Lightness of Being"

“Hrabal’s peculiar strength is his ability to entertain the simplest reader and yet be admired by the most intellectual of intellectuals.”
— Josef Škvorecký, author of "The Engineer of Human Souls"

“Arguably the best prose stylist of the twentieth century.”
— Words Without Borders
or
Buy Here
(This book is on backorder)
Copyright © 2020 American Booksellers Association