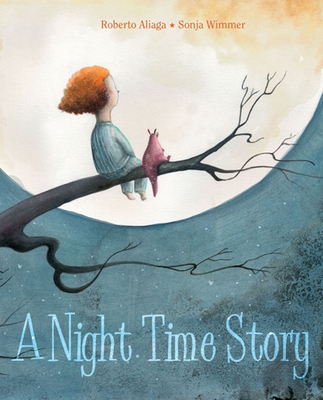 Winner of:
Book of the Year Honor (Gold Medal), 2013 Gelett Burgess Award
Whimsical illustrations bring a child's dreams to life in this beautiful and imaginative bedtime story. Every evening when he goes to bed, the night sits at the child's bedside and reads him a story. Some stories are sweet, others are magical, and still others are mysterious, but they all inspire his dreams as he drifts off into a peaceful good night's sleep.

The award-winning author Roberto Aliaga was born in Spain where he graduated as a biologist. He has published more then 30 books, many of which have been translated into different languages. In 2009 he was included in the White Raven list. After several years studying and working as a designer in her hometown Munich and Brussels, Sonja Wimmer decided to devote herself to illustration and traveled to Barcelona to continue her artistic training at the Llotja School of Design Art. Since then, she lives between brushes and stories, working as an illustrator and freelance for publishers and other customers worldwide. She has received many awards for her work in the United states, most notably Gold Medal for Best Illustrator for The Word Collector.
Loading...
or
Not Currently Available for Direct Purchase