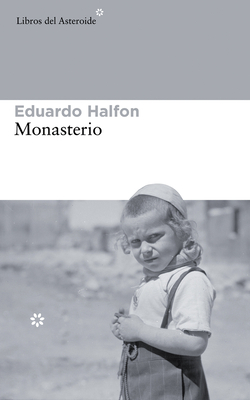 Exhausted after a 15-hour flight, two young Guatemalans wait at baggage claim at Ben Gurion International Airport in Tel Aviv. They have come to attend their younger sister's wedding to an Orthodox Jewish Brooklynite in Jerusalem. While many look to Israel as the promised land, the narrator of this book, who considers himself "a Jew, sometimes," is surprised to encounter the country with increasing uneasiness. His risky meeting with a sexy Israeli, whom he had met years earlier in Guatemala, forces him to confront his own family history. An autobiographical novel in a tone as simple as it is lyrical, Monasterio is a moving and intense journey to the depths of identity, religious intolerance, limits, and the inventions man uses to understand himself and survive.

“Eduardo Halfon is a brilliant storyteller.”  —Daniel Alarcón, author, At Night We Walk in Circles

“Eduardo Halfon belongs to a new generation of Latin American writers who, from the beginning, demonstrate an impeccable mastery of their craft, without any hesitation in the use of language.”  —Sergio Ramírez, former vice president of Nicaragua and author, Margarita, How Beautiful the Sea

“Written as linked recollections, the stories in Monastery divulge a man who introduces himself not with who he is but through what he cares to know about someone else.”  —Todd Wellman, Boswell Book Company, on the English-language edition

“Halfon passionately and lyrically illustrates the significance of the journey and the beauty of true mystery. The Polish Boxer is sublime and arresting, and will linger with readers who will be sure to revisit it again and again.”  —Booklist, starred review, on The Polish Boxer

“Eduardo Halfon’s prose is as delicate, precise, and ineffable as precocious art—a lighthouse that illuminates everything.”  —Francisco Goldman, author, Say Her Name, on The Polish Boxer

Eduardo Halfon is a Guatemalan writer who received a Guggenheim Fellowship in 2011. He is the author of El boxeador polaco, De cabo roto, Elocuencias de un tartamudo, Mañana nunca lo hablamos, and Saturno. He lives in Nebraska.
Loading...
or
Not Currently Available for Direct Purchase