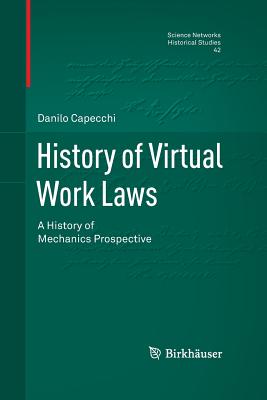 The book presents a history of classical mechanics by focusing on issues of equilibrium. The historical point of view adopted here restricts attention to cases where the effectiveness of forces is assessed on the basis of the virtual motion of their points of application. For completeness, hints of the alternative approach are also referred, the Archimedean for ancient mechanics and the Newtonian for modern mechanics. The laws resulting from consideration of virtual motions are named laws of virtual work. The modern formulations of the principle of virtual work are only a particular form of them.

The book begins with the first documented formulations of laws of virtual work in the IV century BC in Greece and proceeds to the end of the XIX century AD in Europe. A significant space is devoted to Arabic and Latin mechanics of Middle Ages. With the Renaissance it began to appear slightly different wordings of the laws, which were often proposed as unique principles of statics. The process reached its apex with Bernoulli and Lagrange in the XVIII century. The book ends with some chapters dealing with the discussions that took place in the French school on the role of the Lagrangian version of the law of virtual work and its applications to continuum mechanics.

Danilo Capecchi is full professor of mechanics of solids and of history of science at the University of Rome La Sapienza (Italy). His researches in the history of science mainly concern classical mechanics.
Loading...
or support indie stores by buying on