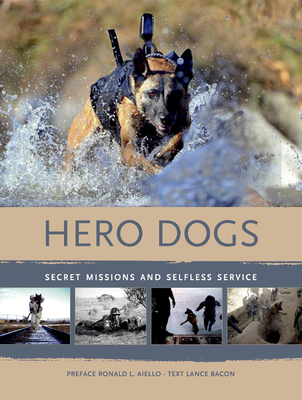 Ronald L. Aiello served in the United States Marine Corps from 1964 to 1970. During this period Ron had the honor of serving with the First Marine Scout Dog Platoon. In the year 2000, Ron and four other Vietnam veteran dog handlers formed The United States War Dogs Association, Inc., which is a nonprofit organization of former and current US military dog handlers and supporting members. Lance M. Bacon is senior staff writer for Army Times, an independent weekly newspaper serving U.S. Army personnel and their families. He covers Army leadership, weaponry, training, and tactics. His combat coverage in Afghanistan includes an award-winning piece on the Battle of Roberts Ridge. Bacon has served as city/military editor of the Jacksonville (NC) Daily News and managing editor of the Kinston (NC) Free Press. During his tenure, the Kinston newspaper was twice honored as the best in the state for its category. It also received the Associated Press' Openness in Government Award and the coveted Freedom of Excellence Award. Bacon is a Marine Corps veteran with eight honorable years of service (1989-1997). He spent two years aboard USS Independence (CV-62), two years as platoon sergeant with the 2nd Light Armored Reconnaissance Battalion in Camp Lejeune, NC, and four years in Public Affairs. There, he received dozens of journalism awards, including being twice recognized as the Marine Corps' journalist of the year, and runner-up a third year.
Loading...
or
Not Currently Available for Direct Purchase