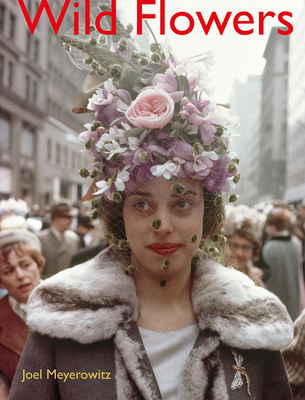 This new and expanded edition of Joel Meyerowitz's widely acclaimed 1983 photobook Wild Flowers features new and unpublished images, and a larger format. For nearly 50 years Meyerowitz has tended his visual garden in the streets, parks and cities that he has visited or lived in. He goes into the streets wide-eyed and passionate, carrying a machine ideally suited to the task of taking it all in.

One day, while editing, Meyerowitz stumbled upon a small group of photographs featuring flowers, which he had accumulated without realizing. He began to see that this innocent premise might serve to bring together a variety of his other photographic interests. Thus Wild Flowers was born. With a unique sense of visual humor and an unmatched attention to detail, Meyorowitz invites readers to see the natural beauty in the busy city landscape. Born in the Bronx in 1938, Joel Meyerowitz is best known for his extensive street photography practice. He began capturing everyday scenes on the streets of New York in 1962 and was an early adopter of color film for the genre, advocating for its use when many self-serious career photographers resisted its popularization. He has published 35 books.