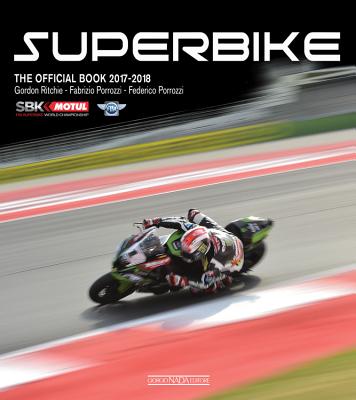 The 2017 championship is analyzed by the authors of this classic official annual. First published to informing the public on one of the most compelling and fascinating world championships.

Among the new elements for this season is the starting grid of race two, which has been revolutionized, with the winner of the Saturday race starting from ninth place.

But the variation of the technical regulation is marginal, apart from the confirmation once more of the various other championships, which were tested over many seasons and reserved for the 1000 and 600 cc, the new entry of the small SuperSport 300 stands out.

The work of Fabrizio Porrozzi, one of the best photographers of the SBK World Championship, is displayed, along with stories from the authors.

Scottish journalist, Gordon Ritchie has been writing about motorcycles for more than 20 years, having been an engineer in a previous life. He has attended every Superbike World Championship race since becoming a freelance journalist at the start of the 1999 season, having been the Deputy Editor of SuperBike Magazine in the UK before then. Ritchie has been active in the MotoGP and BSB Championships over the years and contributes to some of the biggest motorcycle publications and websites in the world.

Fabrizio Porrozzi, born in Rome in 1961, is one of the top Superbike photographers, a sport he has followed right from the start. He owns an agency that also covers Moto GP.

Born in 1980 Federico Porrozzi is a motorsport journalist and reporter of motorcycle races. He has also worked as a press officer for various World Superbike Championship teams (including Althea Racing). Since 2013 he has been working on the motoring web portals for the Italian dailies Corriere dello Sport and Tuttosport.