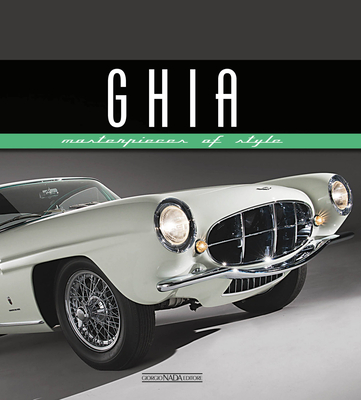 An invaluable book that sheds light on a relatively unknown but lengthy chapter in the history of design,

This is the story of Ghia of Turin, a company active from the 1920s. The firm was responsible for some of the most important models in automotive history, frequently distinguished by daring and trend-setting styling. Tracing the history of Ghia brings to light models of particularly evocative appeal, such as the Fiat 508 Sport Spider (1934), various Alfa Romeo 6C 2500s and the 1900 SS Abarth (1954), not to mention a number of unusual Ferraris from the same decade. A decade that was of fundamental importance to Ghia that, one after the other, produced a series of opulent cars inspired by the styling canons in vogue in the United States in that period, but also styling exercises such as the Volkswagen Karmann Ghia (1955). The Sixties were no less prolific, with further "classics” such as the Fiat 2300 S (1960), the De Tomaso Mangusta and Pantera (1966 and 1970) and the immortal Ghibli from 1966. As was the case for other Italian coachbuilders, there followed a period of crisis that saw the Ghia marque change hands on a number of occasions before being acquired by Ford.

An expert in international car history, Luciano Greggio is an authorative journalist. He has worked for years in publishing and motoring journalism and is the author of the prestigious books Bertone 90 years 1912-2002 (2002), Abarth The man, the machines (2002) In the same series of Vignale: Masterpieces of Style (2020), he wrote Zagato (2017), Touring (2017), Pininfarina (2018) and Giugiaro (2019). He also co-authored the huge work Alfa Romeo The Official Book - Centenary edition (2010).