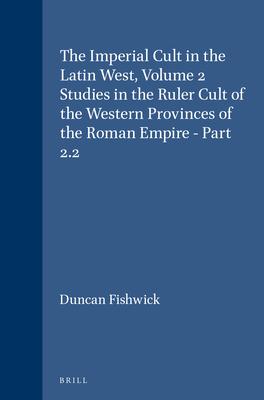 The Imperial Cult in the Latin West, Volume 2 Studies in the Ruler Cult of the Western Provinces of the Roman Empire - Part 2.2

Open worship of the Roman Emperor with sacrifice, priests, altar and temple was in theory contrary to official policy in Rome. The cult of the living emperor by less direct means, however, might be achieved in various ways: the offering of cult to his companion genius or the divine numen immanent within him; the elevation of the Imperial house to a level at which it became godlike; the formal placing of the emperor on a par with the gods by making dedications to him ut deo; the conversion of divinities of every kind into Augustan gods that served as the Emperor's helper and protector; the creation of Augustan Blessings and Virtues that personified the qualities and benefactions of the emperor.
Volume II, 2 completes the preliminary set of studies with a select bibliography, indexes and corrigenda to Vols. I, 1-2 and II, 1.