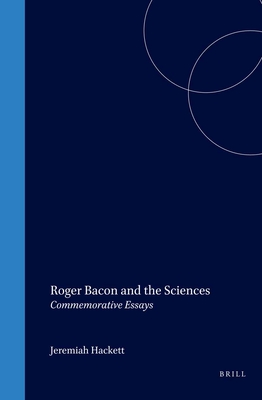 Roger Bacon and the Sciences

This volume deals with the philosophy and thought of Roger Bacon. It is an effort to bring Roger Bacon studies up to date. Attention is given to a wide range of topics: Bacon's life and works, Bacon's contribution to the trivium (language studies) and the quadrivium (scientific-mathematical studies), his notion of a science, his moral philosophy, Bacon's contribution to medicine, alchemy, astrology, Bacon's positions in physics and metaphysics, an up dated bibliography of Bacon studies and a review of the state of Bacon Manuscripts.
The volume situates Roger Bacon in the context of 13th century philosophy and thought, as well as demonstrating his importance for later thinkers.
It is expected that it will be a major new contribution to Medieval and Renaissance Studies.

Jeremiah M.G. Hackett, B.A., M.Phil. (Dublin), M.S.L., Ph.D. (Toronto, 1983) is Associate Professor of Philosophy at the University of South Carolina, Columbia. He has published on Roger Bacon, on 13th century Philosophy and on 14th century German Mysticism. He is editor of Medieval Philosophers (Dictionary of Literary Biography, 1995).
Loading...
or
Not Currently Available for Direct Purchase