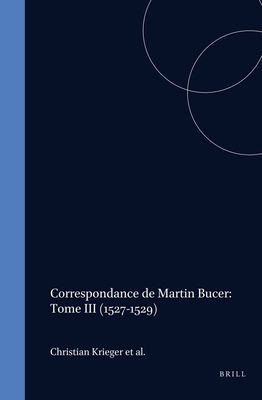 The third volume of Bucer's Correspondance covers the years from 1527 to 1529. In this period the reformer played an increasing part in Strasbourg, while his renown started growing abroad. In Strasbourg he was put in charge of the St. Thomas parish, located closer to the city center. Along with his colleagues he appealed relentlessly to the City Council for a stricter moral discipline, for struggle against anabaptism and celebration of the mass, which was suspended on February 20, 1529. Moreover he engaged in great activity in publishing five important biblical commentaries.
Outside Strasbourg he intensified his evangelical propaganda in countries speaking romanic languages. His active involvement in the Berne disputation in January 1528 helped him make contact with the European Reformation. In the disastrous sacramentary strife he continued taking part in advocating concord between the protestant theologians. That is why he joined Philip von Hessen in setting up the Marburg colloquium. Faced with whose partial failure, he did his best to encourage Zwingli's project of a defensive alliance among evangelical cities in Switzerland and in the South-West of Germany, called the "Burgrecht".

Jean Rott studied at the famous Ecole des Chartres in Paris. He was appointed Librarian and subsequently Researcher at the Centre National de la Recherche Scientifique. He gained international renown by his research in and publications on the religious history of 16-century Elsas, of which 63 were published in the Investigationes Historicae (Strasbourg, 1963). Of particular interest are the publication of the 4 volumes of Quellen zur Geschichte der Taufer (Strasbourg) and the Correspondence of Bucer. Jean Rott is docteur es lettres of the University of Strasbourg and holds an honorary doctorate at the Universities of Munster in Westphalen and Neuchatel. His expert knowledge and leading contribution to the field of history are widely acknowledged.
Loading...
or
Not Currently Available for Direct Purchase