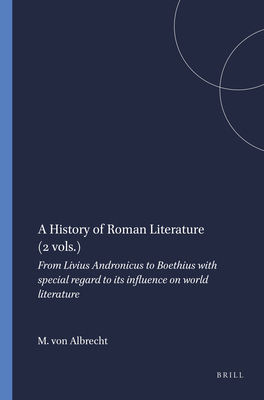 A History of Roman Literature (2 Vols.)

Michael von Albrecht's A History of Roman Literature, originally published in German, can rightly be seen as the long awaited counterpart to Albin Lesky's Geschichte der Griechischen Literatur. In what will probably be the last survey made by a single scholar the whole of Latin literature from Livius Andronicus up to Boethius comes to the fore. 'Literature' is taken here in its broad, antique sense, and therefore also includes e.g. rhetoric, philosophy and history. Special attention has been given to the influence of Latin literature on subsequent centuries down to our own days.
Extensive indices give access to this monument of learning. The introductions in Von Albrecht's texts, together with the large bibliographies make further study both more fruitful and easy.