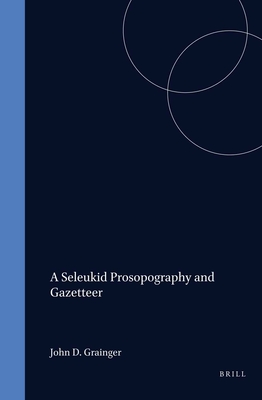 A Seleukid Prosopography and Gazetteer (Mnemosyne #172)

The Seleukid kingdom was one of the greatest states of the ancient world, stretching from Greece to India; it is also one of the least known. This reference work lists all the people whose names are known who lived in that kingdom, classifying them into rulers, officials and subjects, and in each case noting their activity. In addition all the foreigners whose lives affected the Seleukid state are listed.
The Gazetteer lists the places which were included in the kingdom, classified as regions, including provinces and peoples, or settlements, whether cities or villages, with a description of their place in its history. In addition the institutions of the kingdom, the social and political glue which made it work, are noted and briefly described.

John D. Grainger, Ph.D. (1987) in Ancient history and Archaeology, Birmingham University. He has published several books and articles on the Seleukid kingdom, including a biography of Seleukos Nikator, The Cities of Seleukid Syria and Hellenistic Phoenicia.
Loading...
or
Not Currently Available for Direct Purchase