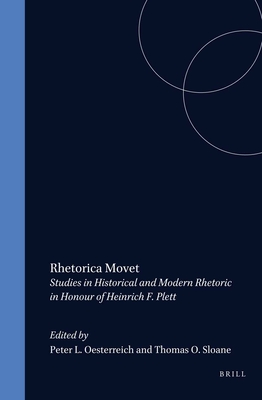 This collection of articles in English and German covers a wide interdisciplinary spectrum of topics in literature, linguistics, philosophy, law, theology, education, politics and intellectual history. They deal with historical and modern aspects of rhetoric and reflect the state of rhetorical scholarship in North America and diverse countries of Europe. The topics include, among others, the treatment of 'enargeia' in Quintilians's Institutio Oratoria, the role of Petrus Ramus in the Ciceronian controversy, the social activities of the Rederijkers in the Dutch Republic of the late 16th and early 17th century, the role of 'elocutio' in Renaissance grammar books, Martin Luther's attitude towards rhetoric, the functions of forum and theatre in the history of eloquence, a critical review of models of the word-play, rhetorical interpretations of works by W. Shakespeare, J. Milton, L. Sterne, B. Brecht and G. Benn.

Peter L. Oesterreich, Dissertation (1984) in Philosophy, University of Essen, is Professor of Philosophy at the Augustana Hochschule in Neuendettelsau, Bavaria. His publications focus on the relationship between rhetoric and philosophy, e.g. Das gelehrte Absolute (Darmstadt, 1997).Thomas O. Sloane, Ph.D. (1960) in Speech, Northwestern University, is Professor of Rhetoric Emeritus at the University of California, Berkeley. He has published extensively on the rhetoric and literature of the English Renaissance, including Donne, Milton, and the End of Humanist Rhetoric (1985) and On the Contrary (1998).
Loading...
or
Not Currently Available for Direct Purchase