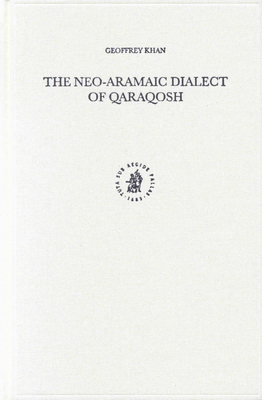 Containing a detailed grammatical description of the spoken Aramaic dialect of the Christian community in the town of Qaraqosh, which lies on the Mosul plain in Northern Iraq, this volume also includes a transcription of oral texts recorded in the dialect.
The grammar is based on extensive fieldwork carried out among native speakers. It consists of sections on phonology, morphology and syntax. There is also a study of semantic fields in the lexicon of the dialect and full glossaries of lexical items.
This Aramaic dialect has never been described before. It is one of the most archaic dialects in group known as North Eastern Neo-Aramaic that contains many features that have not been found in other dialects. These include several lexical elements that are not found in earlier literary Aramaic but can be traced back to Akkadian and Sumerian. Knowledge of the dialect is now being lost among the younger generations, so this volume is an important linguistic record.

Geoffrey Khan, Ph.D. (1984) in Semitic languages, School of Oriental and African Studies, University of London, is Reader in Semitic Philology at the University of Cambridge and Fellow of the British Academy. He has published extensively on medieval Semitic philology and Neo-Aramaic dialectology.
Loading...
or
Not Currently Available for Direct Purchase