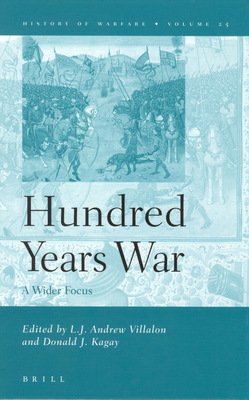 This volume, the first of a two-volume set, is the work of fourteen European and American scholars and focuses on the wider aspects of the Hundred Years. These essays range far afield from the traditional heartlands of Hundred Years War studies to investigate the influence of the conflict on Italy, the Low Countries, and Spain and on such topics as urban history, and the actualities of weapon use on the battlefield. A number of the essays in this collection seek to re-examine old but thorny questions long associated with the conflict, including the real immediate impact of gunpowder technology on siege warfare during the fourteenth century and the "purposeful" strategy of Henry V in staging and bringing about the battle of Agincourt in 1415.
With contributions by L.J. Andrew Villalon, Mar a Teresa Ferrer i Mallol, Donald J. Kagay, Clara Estow, William P. Caferro, Sergio Boffa, Peter Michael Konieczny, Paul Solon, Manuel S nchez Mart nez, James E. Gilbert, Jane Marie Pinzino, Clifford J. Rogers, Kelly DeVries, and John Clement.

Winner of the 2014 Verbruggen Prize of De Re Militari (the Society for the Study of Medieval Military History) given annually for the best book on medieval military history.

L.J. Andrew Villalon, Ph.D. (1984) Yale University, is Professor at the University of Texas. He specializes in late medieval and early modern European history, and has published extensively on such diverse subjects as Pedro "the Cruel", Don Carlos, San Diego de Alcala, and Machievelli.Donald J. Kagay, Ph.D. (1981) Fordham University, is currently a Full Professor at Albany State University. As a specialist on medieval Spain focusing on the law and institutions of the Crown of Aragon, Kagay has published translations of two important eastern Spanish legal texts: the Usatges of Barcelona (1981) and the Commerationes of Pere Albert (2002).
Loading...
or
Not Currently Available for Direct Purchase