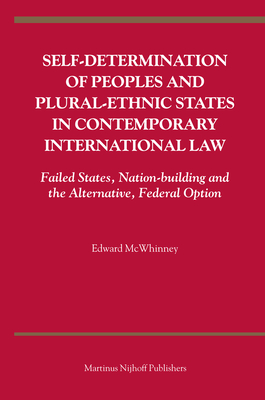 In analysing the contemporary International Law principles as to Self-determination of Peoples, Dr. Edward McWhinney gives a special attention to the crisis today of multinational states put together, usually hurriedly and without proper regard for foreseeable later problems in establishing a plural-constitutional order system, by the military victors in World War I in the imposed Peace treaties of 1919. The key to successful exercise of a claimed right to self-determination is Recognition by other, existing states in the World Community and today also admission to the United Nations. In examining the classical rules on Recognition of States and the recent developed practice as to U.N. Membership, the author signals the continuing antinomy of Law and Power and how high political concerns for their own conceived national interests influence or control decisions on application of the legal ground rules in concrete cases by heads of government and their foreign ministries. The author notes at the same time the attempt to consolidate and codify existing rules on a political "regional" basis, most evident perhaps with the European Union today. In addressing the claimed new legal category of "failed state" with the concomitant asserted legal right of other states to intervene, if necessary unilaterally or outside the United Nations, to impose their own "corrective" measures, he suggests that the postulated "failure" in such cases may frequently stem less from problems inherent in the state concerned than from past hegemonial actions by outside states in pursuit of their own geopolitical interests in the region. A special concluding chapter draws on the empirical record of the historical, often trial-and-error experience of the Succession states to the Versailles treaties settlements and to the assorted acts of Decolonisation of the former European Imperial, Colonial powers.

Edward McWhinney draws on a richly varied professional experience as a Professor teaching in Canada and also in the U.S.. France, Germany, Japan and other countries; as a Consultant and Adviser to the Canadian and a number of foreign governments and to the United Nations; and as an elected Member of Parliament and Parliamentary Secretary for Foreign Affairs. He is Past President of the Institut de Droit International, and author of books, written and published in several different languages, on General Theory of International Law, the United Nations and the International Court of Justice, and Federalism and Constitutional Pluralism.
or
Not Currently Available for Direct Purchase
Copyright © 2020 American Booksellers Association