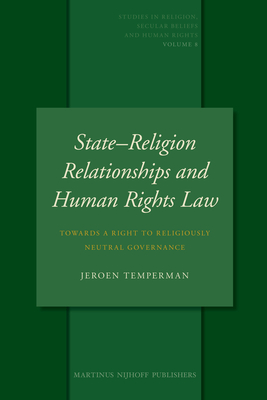 Towards a Right to Religiously Neutral Governance (Studies in Religion #8)

This book examines the question of how the mode of state-religion identification affects the state's scope for compliance with human rights law. It presents a human rights-based assessment of the various modes of state-religion identification and of the various forms of state practice that surround and characterize these different state-religion models. A close assessment of norms of human rights law substantiates that, although human rights law on the face of it is seemingly neutral to the issue of state-religion identification, legal principles can be extrapolated that have a profound bearing on the question of legitimacy of the possible diverse relationships that may exist between the state and religion. A range of thematic case studies on, among other issues, Establishment of Religion & the 'Equal Religious Rights of Others', Religion & Freedom of Expression, Religion & Political Rights, Religion & Educational Rights, Religion & Freedom of Association and Religion & Equal Employment Opportunities, demonstrates that existing regimes of positive state identification with religion are not devoid of forms of institutionalised discrimination and de facto practices of discrimination on grounds of religion or belief (or lack thereof). At the same time, it is observed by the author that in some secular or separationist states the ideals of state secularism and separationism have come to be considered ends in themselves. This has given rise to situations where the principles of secularism and separationism are construed so as to impose illegitimate limits on the activities of religions or illegitimate limits on the individual manifestation of certain beliefs. This book makes a case for the recognition of a state duty to remain impartial with respect to religion or belief in all regards so as to comply with people's fundamental right to be governed, at all times, in a religiously neutral manner.

Jeroen Temperman is Associate Professor of Public International Law at the Erasmus University Rotterdam. He has published extensively on international human rights law and religion-state relationships, matters of freedom of expression, freedom of religion or belief and non-discrimination. He is editor-in-chief of Religion & Human Rights: An International Journal.
Loading...
or
Not Currently Available for Direct Purchase