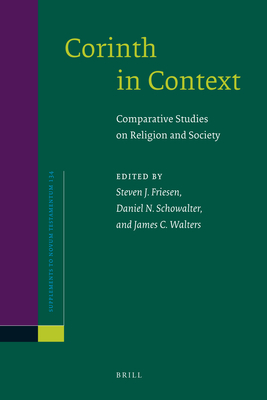 This volume is the product of an interdisciplinary conference held at the University of Texas at Austin. Specialists in the study of inscriptions, architecture, sculpture, coins, tombs, pottery, and texts collaborate to produce new portraits of religion and society in the ancient city of Corinth. The studies focus on groups like the early Roman colonists, the Augustales (priests of Augustus), or the Pauline house churches; on specific cults such as those of Asklepios, Demeter, or the Sacred Spring; on media (e.g., coins, or burial inscriptions); or on the monuments and populations of nearby Kenchreai or Isthmia. The result is a deeper understanding of the religious life of Corinth, contextualized within the socially stratified cultures of the Hellenistic and Roman periods.

Steven J. Friesen, Ph.D. (1990) in the Study of Religion, Harvard University, is the Louise Farmer Boyer Chair in Biblical Studies at the University of Texas at Austin. His publications include Twice Neokoros: Ephesus, Asia, and the Cult of the Flavian Imperial Family (Brill, 1993), and Imperial Cults and the Apocalypse of John: Reading Revelation in the Ruins (Oxford University Press, 2001).Daniel N. Schowalter, Th.D (1989) in New Testament and Christian Origins, Harvard Divinity School, is Professor of Classics and Religion at Carthage College, and is Co-Director of the Omrit Archaeological project in Northern Israel. His research focuses on archaeological evidence for the religions of the Roman EmpireJames C. Walters, Ph.D. (1991) in Religious Studies, Boston University, is Associate Professor of New Testament and Christian Origins at Boston University. His publications focus on the urban social contexts of the Apostle Paul's mission and letters including Ethnic Issues in Paul's Letter to the Romans (Trinity Press International, 1993)
Loading...
or
Not Currently Available for Direct Purchase