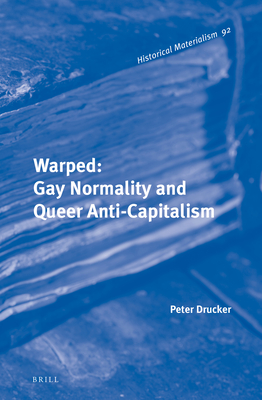 Recent victories for LGBT rights, especially the spread of same-sex marriage, have gone faster than most people imagined possible. Yet the accompanying rise of gay 'normality' has been disconcerting for activists with radical sympathies. Global in scope and drawing on a wide range of feminist, anti-racist and queer scholarship and analysis, Warped: Gay Normality and Queer Anti-Capitalism shows how the successive 'same-sex formations' of the past century and a half, corresponding to different phases of capitalist development, have led both to the emergence of today's 'homonormativity' and 'homonationalism' and to ongoing queer resistance. The book's second half summarises different sexual rebellions and the queer dimension of multifarious movements for social justice and transformation, seeing in them harbingers of a unified and powerful queer anti-capitalism.

Peter Drucker, Ph.D. (1994) in political science, Columbia University, is a Fellow of the International Institute for Research and Education in Amsterdam. A queer and anti-war activist, he has published extensively on socialist theory and history and LGBT studies.
or
Not Currently Available for Direct Purchase
Copyright © 2020 American Booksellers Association