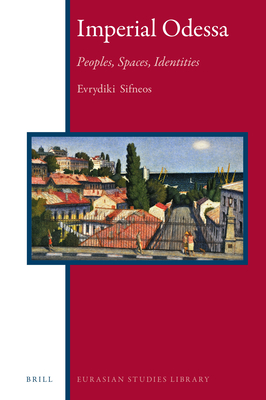 Imperial Odessa: Peoples, Spaces, Identities is a book about a cosmopolitan city written by a cosmopolitan scholar with a literary flair. Evrydiki Sifneos conceives Odessa as more of a fin-de si cle east Mediterranean port-metropolis than as a provincial port-city of the Russian Empire in the nineteenth century due to two of its principal characteristics: its function as a hub of international trade and travel, and the multi-ethnic character of its inhabitants. The book unfolds around two interpenetrating axes. The first one introduces a new "peripatetic" approach that discovers the space of the city; and the other, the one that has given it its dynamic, is the socio-economic transformations that germinated within the political changes.

Evrydiki Sifneos (1957-2015) was Research Director of the Institute of Historical Research of the National Hellenic Research Foundation in Athens. She has published monographs and many articles on Black Sea history in English and Greek, including Greek Merchants in the Sea of Azov: The Power and the Limits of a Family Enterprise (Athens, 2009).
Loading...
or
Not Currently Available for Direct Purchase