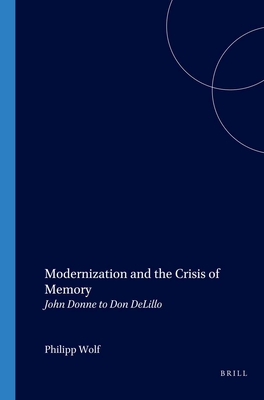 Modernization and the Crisis of Memory

Contemporary studies of memory focus either on the psychology of remembering, on its archives and media, or on the traditional ars memoriae. The general cultural framework with its social and material factors is largely neglected, despite the obvious impact on both collective and individual mnemonic mentality. But, as in the first half of the seventeenth century or the later twentieth century, the literary and political invocation of religious, collective or national memory occurs most of all in times of historical rupture, and attendant changes of a radical technological and cultural nature. Appeals to the power of memory are not only indicative of the anxiety about the loss of its binding or absolving character. They are already symptomatic of a deep crisis of cultural memory in itself, resulting from an erosion of firm spatial, temporal and historical references along with an increasing tendency towards reflexivity, which calls the apparently self-evident facts of past and present into question. The continuity of remembering, however, as this study argues, presupposes the permanence and recurrence of social and material relations, of representative or symbolic persons, objects and events, in which it can inscribe itself. But owing to the shift in historical consciousness from (typological) past to progressive future and novelty and under the impress of industrial production and modern media (mobility and communications), the Western subject has to cope constantly with new empirical situations, symbolic values and historical or current information whose origin and evolution - indeed, the very memory of them - remain alien to personal identity and memory. The promise of redemption and salvation, still inherent in seventeenth-century collective memory, loses credibility.
The study includes a wide range of authors from Donne to Pope, Tennyson to George Eliot and Walter Pater, W.B. Yeats to Don DeLillo and covers the whole period from early modern England to postmodernism. It can thus also be read as a brief history of Western memory and its continuing crises.