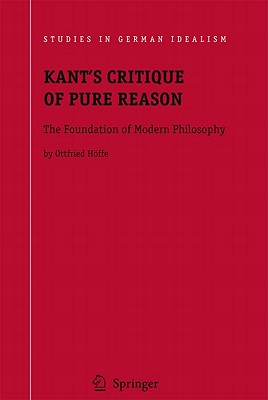 The Foundation of Modern Philosophy (Studies in German Idealism #10)

Kant's "Critique of Pure Reason" is so outstanding among modern philosophical works, that it can be termed "the" foundation of modern philosophy. Schopenhauer termed it "the most important book ever to have been written in Europe." Otfried H ffe guides the reader through the "Critique" one step at a time, expounding Kant's thoughts, submitting them to an interpretation and drawing a summary conclusion, placing the work and its topics within the context of its modern successors. A "critical" interpretation of Kant's text reveals that he had something to say on many discussions that are said to have originated after his death. Reducing his argumentation to its central tenets, it can be made stronger and applicable to current problems. Kant's eventual concern, however, even when writing theoretical philosophy, lay with the practical. Elaborating this concern and its connection to Kant's theoretical philosophy is a prime tenet of this book.