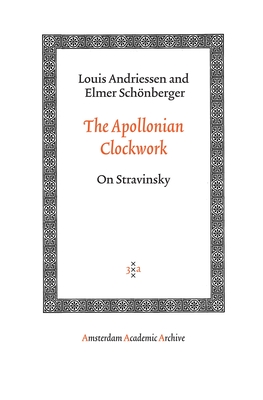 ‘I think my music deserves to be considered as a whole’, Igor Stravinsky remarked at the end of a long and restless career, and that is exactly what the authors of The Apollonian Clockwork do. In 1982, convinced that there is no essential difference between ‘early’ and ‘late’ Stravinsky, Louis Andriessen and Elmer Schönberger were the first to write a monograph on the composer which radically breaks with the habit of dividing his works into ‘Russian’, ‘neoclassical’ and ‘serial’. In an essay which continually shifts in its approach, style and perspective, the authors elaborate on their insight that a single, immutable compositional attitude underlies the whole of Stravinsky’s oeuvre. By this token the book not only offers an analysis of the composer’s protean work and artistry but takes example by it as well.

Elmer Schönberger (1950) is a musicologist, composer and writer. From 1976 to 2004 he was main music critic for the Dutch weekly Vrij Nederland. His most recent book with musical essays is Het Gebroken Oor (2005), his most recent composition …dressing old words new… (2005) and his most recent theater play Naar Moskou, Moskou (2005). As a novelist he made in 2003 his debut with Vic, met name.

Louis Andriessen (1939) is widely regarded as a central figure in the international new music scene. Performers of his work include the two Dutch groups named after his works De Volharding and Hoketus, the Asko/Schoenberg Ensemble, London Sinfonietta, Ensemble Modern and Bang On A Can All Stars. Amongst his many works for music theater are collaborations with Peter Greenaway (Rosa, Writing to Vermeer) and Hal Hartley.
or
Not Currently Available for Direct Purchase