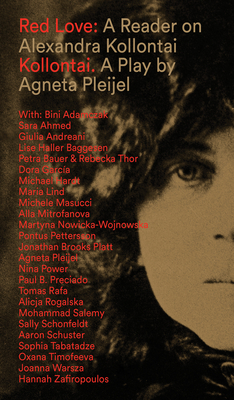 A Reader on Alexandra Kollontai

Revisiting the ideas of a Russian revolutionary and feminist on such topics as sexual politics, free love, and motherhood.

Alexandra Kollontai was a prominent Russian revolutionary, a commissar of Social Welfare after the October revolution in 1917, and a long-term Soviet ambassador to Sweden. As a cofounder of the Zhenotdel, the “Women's Department” in the communist party, she introduced abortion rights, secularized marriage, and provided paid maternity leave. Kollontai considered “comradely love” to be an important political force, elemental in shaping social bonds beyond the limitations of property relations.

Red Love stems from a yearlong research by CuratorLab at Konstfack University together with Tensta konsthall, that led up to Dora García's exhibition Red Love and its related public programing. A number of artists and thinkers revisit Kollontai's ideas on the politics of love and their relation to current political, social, and feminist struggles. The publication also includes the biographical play Kollontai from 1977 by distinguished Swedish writer Agneta Pleijel.

Part critical analysis and part artist book Red Love seeks to address the ongoing relevance of Kollontai's thought, and the increasingly complex sphere of love relations in advanced capitalism. Is there a place for Kollontai's vision of comradely love today and how could it be formed?

Alexandra Kollontai was a Russian revolutionary feminist and the only female minister in Lenin's first government after the revolution in 1917.

Maria Lind is Director of the Tensta Konsthall, Stockholm, and former Director of the graduate program at the Center for Curatorial Studies at Bard College. In 2010, Selected Maria Lind Writing was published by Sternberg Press.

Joanna Warsza is a curator in the fields of visual and performing arts and architecture. She was an artistic director of Public Art Munich from 2016 to 2018 and since 2014 she has led the curatorial program CuratorLab at Konstfack University in Stockholm.
Loading...
or
Not Currently Available for Direct Purchase