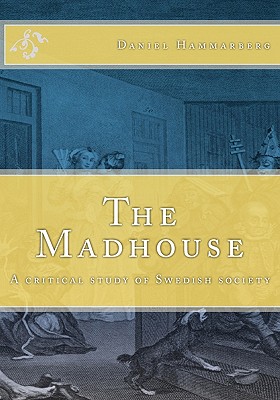 A critical study of Swedish society

Have you ever grown tired of the constant white-washing of Socialist countries by today's mass media? Well, here's the antidote - a 120,000 word expos on the real contemporary Sweden, fully unmasked in all its vileness. Hear about... ... the five teenagers who have taken their lives the last couple of years as a consequence of being forcibly taken from their families and put into orphanages. ... the families whose children were taken by the government as they attempted to leave the country, and the ex-Communists who want to make the very attempt to do so a crime. ... the social authorities justifying in official documents seizing a woman's new-born child at the maternity hospital. ... the Muslim man who won a discrimination lawsuit after botching a job interview from refusing to shake a woman's hand, and also sued the government after losing welfare payouts from not shaking the hands of the female welfare officer. ... the homosexual man who attempted to sue the municipality after he was prevented from browsing naked personal ads at the library, and about the prisoner who filed a complaint with the government after the warden in charge of him told him to shut up. ... the world's most luxurious prisons and the inmates talking about how joyful their stays were. Swedish inmates get to choose where they want to do their time, and they can afford to be picky. ... the convicted rapist who cost society eleven legal proceedings to keep the porn magazines that had been taken from him, and finishes by suing the government for damages because the prison had kept them from him. ... the military man who while heavily intoxicated shot dead seven people and landed 48 out of 48 fired bullets against running victims, to then be granted furloughs after only a couple of years in prison. ... the male Supreme Court Justice who was convicted of having illegally bought sexual services from a young man and then was able to stay on his post. ... the elite of Swedish society during the 1970's molesting underaged girls who were wards of the state, including two prime ministers as suspects; as well as the society that has only a fine as standard punishment for distributing child porn. ... the physically disabled and immobile immigrant who's got eleven government-paid personal assistants so that he can drink whiskey and smoke cigarettes all day. ... the 79 parliamentary bills that address LGBT rights and cover everything in society, from elder care to foreign aid. "Unfortunately only a fraction of SIDA's the foreign aid agency] budget today goes to LGBT work" from one of the bills. ... how doctors can be sentenced to prison for refusing to perform abortions, and shepherds that risk being attacked by bears can't even get permits for revolvers. ... how citizens can be convicted of cruelty to animals if they don't spend "a couple of hours every day" petting their cat. ... the state TV that held a tribute night to Fidel Castro. "Castro isn't a dictator in the sense the propaganda claims" - actual quote from this evening, on top of repeated programming praising "Che" Guevara. ... the many political dissidents sentenced to prison for the views they've expressed, and learn about what they had to say. ... the young man who already as a teenager was convicted of "hate speech" and who within 12 years would have gone to court no less than 12 times over such charges. ... the country that almost banned publication of the Bible for its stance on homosexuality, and about the Christians sentenced to prison for preaching it. Yes... This is a compilation of stories, facts and anecdotes from what must truly be the most insane country on the planet, with nothing else like it, organized into twelve chapters covering different areas of society.

Daniel Hammarberg is a Swedish author (born in 1976) who considers himself a nationalist and a social conservative. Apart from being fluent in Swedish and English, he has some knowledge of a couple of other languages too, like German. He's producing written and video material mainly in English and has two published books to his name - "The Madhouse: A Critical Study of Swedish Society" (non-fiction) and "An Alabama Story" (fiction). He's very careful with the quality of his work and regards himself a perfectionist, completely unwilling to ever taint literature with an inferior product. Apart from writing, he's also competed in strongman and other power sports.
Loading...
or support indie stores by buying on