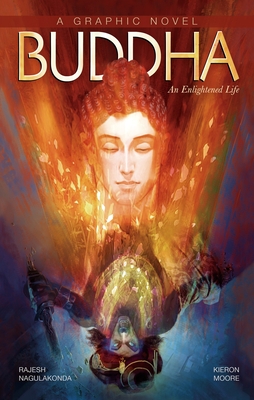 In the ancient city of Kapilavastu, a prince named Siddhartha Gautama was born, and a wise man declared that he would grow up to be either a powerful king or a spiritual leader who would end suffering. Though his father kept him sheltered, Siddhartha soon became aware of the pain and disease that plagued the world and so abandoned his noble life in order to find answers. He'd eventually become the founder of a religion which persists today, and which has spread a message of compassion and understanding across the world. It was not an easy journey; Siddhartha faced the temptations of a demon, the outbreaks of war, and rebellion within his own order. Follow his journey from prince to pauper and from beggar to Buddha.

"A captivating story. . . The reader learns of Siddartha’s trials and triumphs, a bit about the political world in which he lives, and how his wisdom became the basis for a religion. The illustration captures the reality of life in ancient Nepal/India, and the divinity of the budding Buddha." — Stephanie Tournas, Robbins Library, in Youth Services Book Reviews

"This title is an accessible, graphic introduction to the life and teachings of Siddhartha Gautama. . . Artwork is polished. . . This would be a high interest addition to biography and Dewey sections lacking information on world religions." — Jenny Gapp, Teacher-Librarian, in School Library Connection

"This biography has an adventurous, mythic feel yet never strays from relating the central tenets of Buddhism. The art is equally mythic, blending exquisite colors; beautiful, ornate line work; a clean narrative; and expressive characters in a way that evokes distant lands and times without being unfamiliar. Those interested in history, mythology, and spirituality, or anyone looking for an introduction to the Buddha and his teachings will enjoy this book." — Lucy Roehrig, Ann Arbor Dist. Lib., in Library Journal


"The illustrations are beautiful, perfectly encapsulating the emotions of their scenes. The characters are complex, the story is always fascinating, and it is great as a way of teaching newer generations about the origins of this religion that can now be found around the world." --Benedict Hutchinson, A Goblin Reviews Graphic Novels
"I highly recommend Campfire's comics. They do what they are intended to do and do it in a way that excites kids about classic literature." -- Chris Wilson, The Graphic Classroom

Kieron Moore grew up in Lancashire, northern England. He studied at the University of York, and has worked in the British TV and film industries, plus has made a living as a freelance writer and journalist, writing for Doctor Who Adventures, Starburst magazine, and Intellect Books. Comics have always been one of his passions, having started by publishing a Star Wars rip-off about a Jedi penguin online at the age of twelve. His writing has become better since then, but his artwork has become significantly worse, so he gets other people to do that bit now.


Lines and colors have been a part of Rajesh Nagulakonda's life right from his childhood in Chirala, Andhra Pradesh. His grandfather was a goldsmith and his father a printer. Both of them influenced him to take up art as a career. Rajesh believes in instinct rather than education. He mostly spends his time alone trying to explore different forms of art, such as sculpture, nail-art on paper, metal engraving, and of course, painting. Rajesh lives in Delhi with his wife and two daughters and with dreams of becoming a versatile artist. Some of his Campfire titles are Magical Animals, Krishna, The Little Alien, Ganesha and Pride and Prejudice.
Loading...
or
Not Currently Available for Direct Purchase